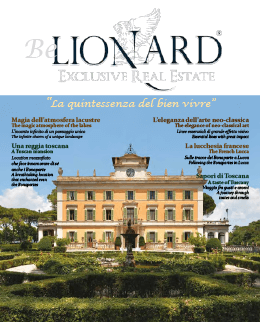 
Immersed in the hills of one of Tuscany’s most sought after locations, this wonderful country house boasts stunning views of the verdant green landscape.  The ancient spirit of the house, whose original structure is traced back to the Carolingian period, has been preserved through able restoration works which have successfully kept the original features which blend seamlessly into more modern elements.
A true corner of paradise cradles the villa.  Two rows of cypress trees shield the property from view and lead us to the entrance of the villa which is itself surrounded by a 10 hectare park where olive trees and secular cypress trees are present, as well as a swimming pool and even a small lake.  The magnificent views can be enjoyed equally from the enchanting garden or from inside the villa itself.  The quality of the surrounding landscape and the historical importance of the property conspire to make this property truly unique in its beauty.
The country house extends for 980 m2 in total internal surface area and is organised into three large apartments.  From the front door the large entrance opens into the villa.  Two small stairways lead us to the main floor where the living room hosts the antique fireplace and a precious eighteenth century fresco bearing the family coat of arms.  From the living room we have access to the dining room and also the study and the master bedroom with private bathroom.  On the same floor the large rustic kitchen is found which is also connected to the living room by another door.  On the last floor three large and spacious bedrooms are located making great use of the spacious environment, as well as another master bedroom with private en-suite marble bathroom  Further down the hallway we come to the living area composed of living area, dining room and large kitchen.  The house is furnished with elegance, in perfect harmony with the rustic style.  The ceilings are composed of heavy wooden beams which have been fully restored.
To the side of the main villa a small 350m2 annex is located, this too perfectly restored and composed of a living room with fireplace, dining room, kitchen and three bedrooms and the same number of bathrooms.  A small distance away, above the country house, a small chapel is located of roughly 90m2, recently renovated and transformed into an additional apartment containing a living room, dining room, kitchen, bathroom and bedroom.

magnificent villa of the xvth century for sale in florence
A few minutes far from Florence, in the exquisite Tuscan countryside, adorned with its vineyards and lines of groves, this luxury villa with pool is for sale.

2,5m to 5m Tuscany - Florence-Region Ref. 0980
See all
x
Notice: this site or third-party tools used by this website make use of cookies necessary for the operation and useful for the purposes outlined in the Cookie Policy. If you want to learn more or deny the consent of all or some cookies, see the Cookie Policy. By closing this banner, scrolling this page, clicking on a link or continuing navigation in any other way, you give the consent to the use of cookies.