Acquabella castle for sale in Tuscany 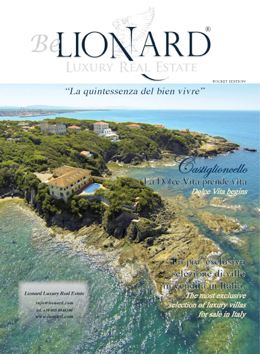 
The constant reminder of the medieval is the principal characteristic that emerges from the walls of this imposing castle, dating back to the second half of the nineteenth century.  The building is a direct testimony to the eclectic neo-gothic and renaissance, of Florence in the XIX century, a city teaming with important Anglo-American personality.


According to the original project imposed by the Architect Corinto Corinti, the structure developed from a bleak and rocky ground, facing the valley of the Arno river.  Today this is difficult to believe, given that the surrounding area is covered with a thick forest of the important Natural Reserve (Riserva Naturale).  A striking landscape of conifers frame the castle.


The building is composed of one main body, the most well cared for of all, right to the details of the locks and latches, to various other building of different use including at one time as stables.  The home, restructured as a work of art, boasts a total surface area of over 4000 m² over 5 levels: the basement, where part of a working kitchen appliance is still visible; the ground floor, where a series of large spacious areas can be found, linking to each other; a striking grand staircase reaches the first floor where traces remain of the original project idea, or rather, the disposition of the private apartments of the owners; and finally, the second and third floors where we find wonderful bedrooms, with elaborate beds and furniture.
The structure, today still undergoing restructure work, lends itself to any setting for grand events.  The ample and striking rooms, in fact, despite being subject to various restructuring work, have not lost the essential characteristics of the original architecture.

luxury villa for sale near arezzo
Immersed in the green countryside of Arezzo, in the town of Loro Ciuffenna in the province of Arezzo, this luxury property is for sale.

villa near florence
In the Florentine hills, luxury property of 600 m2 surrounded by a 1390 m2 garden with tall pine trees and a wonderful view on the Elsa Valley towards the towers of San Gimignano.

luxurious estate for sale in tuscany
Estate of prestige of the Twelfth Century for sale in panoramic location on the infinite valley of Florence.

on application Tuscany - Florence-Region Ref. 0543
See all
x
Notice: this site or third-party tools used by this website make use of cookies necessary for the operation and useful for the purposes outlined in the Cookie Policy. If you want to learn more or deny the consent of all or some cookies, see the Cookie Policy. By closing this banner, scrolling this page, clicking on a link or continuing navigation in any other way, you give the consent to the use of cookies.